From Heraldry of the World
Your site history : Bromsgrove RDC
Jump to navigation Jump to search 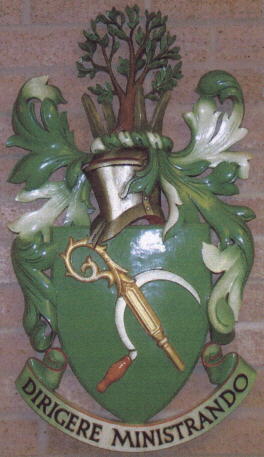 Arms : Vert, the head of a crosier Or and a sickle prope rin saltire.
Crest : On a crest argent and vert, Within a representation of the four stones at Clent Hills, a beech tree proper.
Motto: 'DIRIGERE MINISTRANDO'

The arms were officially granted on November 25, 1952.

The green colour of the shield symbolises the rural areas in the district. The golden crosier symbolises the influence of the Bishops of Worcester in the area for many centuries. In Alvechurch, in the eastern part of the district, the bishops had one of their palaces.

The sickle represents the ancient industry of making sickles and scythes in the western part of the district. The crest shows a beech tree, representing Frankley Beeches, the well known landmark on the northern boundary of the district with Birmingahm.

Literature : Image and information provided by the Bromsgrove District Council