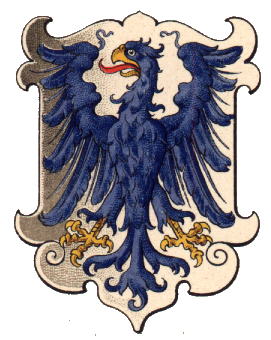 The Duchy of Auschwitz (now Oświęcim Poland) was bought by the Polish Kings in 1457. After the Polish Division in 1772 the Duchy became part of Austria-Hungary. The eagle is either the old eagle of Silezia, or the eagle of Poland. The colours were changed to silver and blue in 1806.