THE NATIONAL EMBLEM AND COAT OF ARMS OF EAST TIMOR 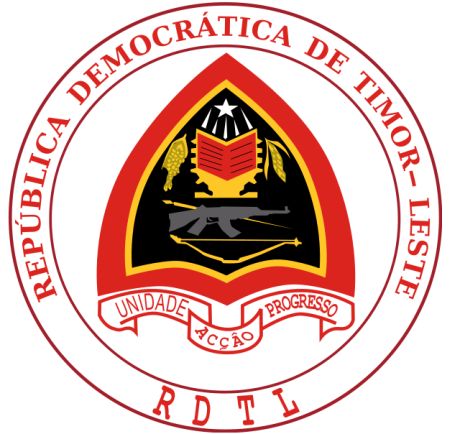 The emblem/coat of arms of East Timor was officially adopted on January 18, 2007.

The upside-down shield with a red bordure symbolizes Mount Ramelau, the highest peak in the country. The shield shows a five-pointed star with five rays of light, an open red book resting upon a yellow industrial gear, a rice and corn ear and an Avtomat Kalashnikova-47 assault weapon with bow and arrows.

It is based on a design first used when the country unilaterally declared independence on November 28, 1975.

The emblem replpaced the coat of arms used from 2002-2007, which are shown below. 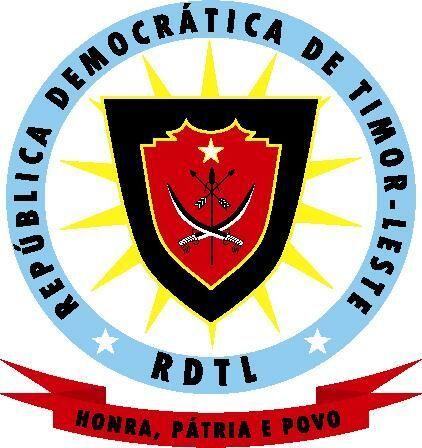 These arms showed two crossed Suriks (traditional swords), a spear, a star, and two arrows. The name of the country is, in Portuguese, on a blue ring around the shield and a sun with 14 rays. The motto in the banner translates as: "Honour, Homeland, and People".

East Timor was a Portuguese colony until 1975.

In 1935 the then Portuguese colony received its first arms, based on the same structure as all Portuguese colonies (compare Angola, Macao and Mozambique). The upper right half and the bottom are identical for all colonies and show the 5 shields of the Portuguese National arms and the waves for the 'overseas' colonies. The upper left half differs between the colonies and for East Timor a black and white Dominican cross in recognition of the role played by the Dominican Order in converting the East Timorese to Roman Catholicism.

East Timor was under Indonesian rule from 1975-1999 as the province Timor Timur.

Timor Timur had its own coat of arms in a similar design as from the other Indonesian provinces. The arms consisted of a golden shield containing wreaths of wheat and cotton enclosing a blue roundel containing a stylized traditional East Timor house. This was surmounted by a blue shield depicting a gold star representing the faith in one God. Below the roundel appeared a traditional Timorese headdress (Kaibauk) bearing the inscription "Timor Timur". 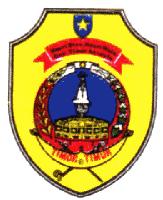