THE NATIONAL ARMS OF UGANDA 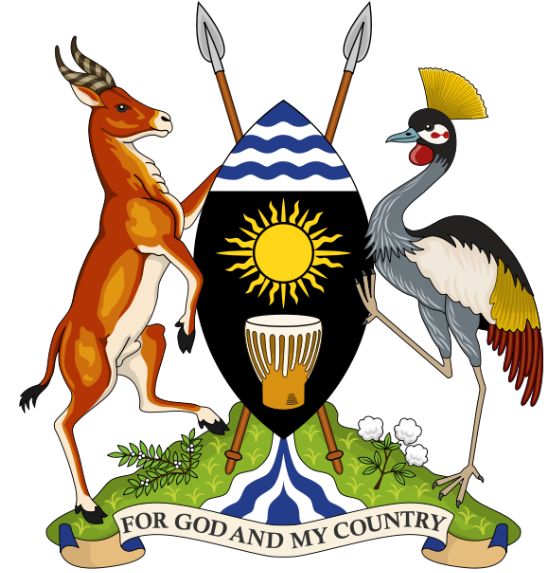 Arms: Sable, upon the fess point a sun in splendour and in base a Uganda drum Or, the skin and guy ropes Argent, a chief barry wavy of six Azure and Argent. Behind the shield two Uganda spears of estate in saltire proper.
Supporters: Dexter a male Ugandan Kob (Adenota kob thomasi); sinister, a Crested Crane (Balearica pavonina gibberifrons), both proper.
Compartment: A grassy mount down the centre of which flows a river (the River Nile), between dexter a sprig of coffee and in sinister a sprig of cotton, both leaved and fructed proper.
Motto: "FOR GOD AND MY COUNTRY"

The upper half of the shield represents the Great lakes, the Lake Victoria and the Lake Albert on which the country borders. The sun is a symbol of progress as well as the sunny climate of the country. The base shows a traditional drum, symbol for the culture of the peoples of Uganda. The drum was also used as a symbol of authority by the different Kings in Uganda before the independence.

The supporters refer to the abundant wildlife in tha country. On the right a Crested Crane (Balearica regulorum gibbericeps), a subspecies of the Grey-crowned Crane and the national bird of Uganda. On the left is the Ugandan Kob (Kobus kob thomasi).

The compartment shows a green mound, representing fertile land, and directly above a representation of the River Nile. Two main cash crops, coffee and cotton, flank the river.

Before independence the country used a badge with only the crane, see below.