From Heraldry of the World
Your site history : Baden-Württemberg
Jump to navigation Jump to search 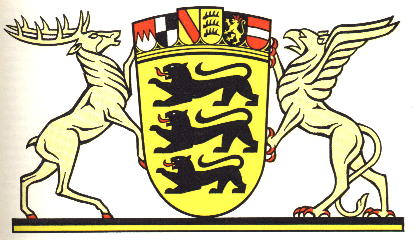 Origin/meaning: The arms were officially granted on August 2, 1954.

The arms show the three lions of the Dukes of Schwaben form the house of Staufen. On the shield is placed a popular crown, which is covered by the arms of former territories that now form the State of Baden-Württemberg. From (heraldic) right to left these are :(Ost-)Franken (Franconia), Hohenzollern, Baden, Württemberg, Kurpfalz and Austria. As supporters a deer and a griffin, taken from the arms of Württemberg and Baden respectively are used.

Schwaben is an area that forms large part of the present State. It was used as a neutral alternative to the arms of Baden or Württemberg. The princes of Schwaben were one of the most important German dynasties in the Middle Ages, as can be seen from the fact that most Kings and Emperors of the Holy Roman Empire between 1138 and 1254 were of the Staufen dynasty, the ruling family in Schwaben. The (then) Dukes of Staufen ruled in the early Middle Ages most of what is now the State of Baden-Württemberg. The dynasty as well as the duchy were abolished in the middle of the 13th century due to the changed political climate. The three lions, however, were still used as a symbol for the territory. They first appear again in the arms of the new Kingdom of Württemberg in 1806.

The oldest known seal with a lion dates from 1186 on the seal of Duke Friedrich V of Hohenstaufen. Twenty years later the Dukes already used three lions as arms. The colours were probably already black on gold, but the oldest coloured images date after the decline of the dynasty.