From Heraldry of the World
Your site history : Barcelona
Jump to navigation Jump to search 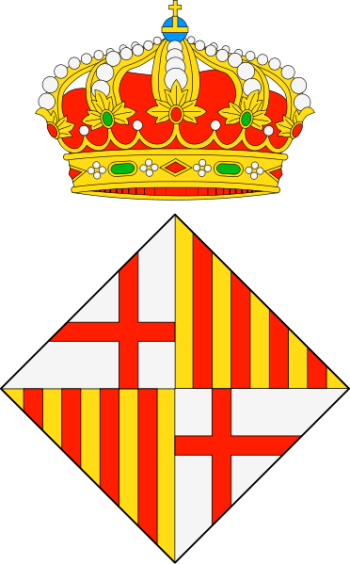 The arms are a combination of the arms of the cathedral and diocese of Barcelona and the arms of the Counts of Barcelona. The first show the cross of St. George the patron saint of the city. The latter arms are derived from the arms of Aragón. The arms symbolise the four lines of blood that the French emperor Charles the Bald draw with the blood of the count of Barcelona, Guifré el Pelós (or Geoffrey the Hairy, in the translated version in English), on the golden shield of the count itself.

The arms of the counts of Barcelona (four gules pales on gold), also called the royal arms, are not derived from the ones of Aragon, but on the contrary, the arms of Aragon are derived from the ones of the counts of Barcelona: in 1137 the count Ramon Berenguer IV married Peronella, daughter of the Aragonese king Ramiro II, and that leads to the union of the two kingdoms (nominally Catalonia was a mixture of counties, but the count of Barcelona acted in fact as a king), or the Confederation of Catalonia-Aragon, or simply Kingdom of Aragon (previously, the Aragonese arms showed a silver cross on azure). Since the union, the arms of Aragon (considering all the Confederation, and not only the strict and former Aragon kingdom) will show the four pales of Barcelona. The city, being the capital of the new kingdom, has a king crown at the top.

King Pere III el Cerimoniós (Peter the Ceremonious) conceded to the city the royal arms with the four pales the 4th July 1345.