From Heraldry of the World
Your site history : Blackpool
Jump to navigation Jump to search 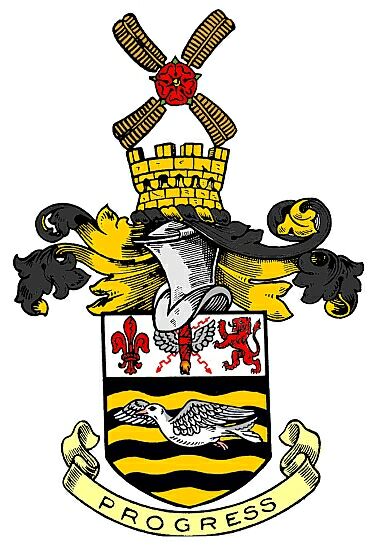 Arms : Barry wavy of eight Sable and Or a Seagull volant proper on a Chief Argent a Thunder-Bolt also proper between a Fleur-de-Lis and a Lion rampant both Gules.
Crest : On a Wreath of the Colours on the Battlements of a Tower Or the Sails of a Windmill saltirewise proper surmounted in the centre by a Rose Gules barbed and seeded also proper.
Motto: Progress

The field of the arms is made up of black and gold waves. The black is a reference to the town's name, the gold to the miles of sandy beaches, and the waves for the sea. The seagull tells us that this is a seaside town.

Between a fleurs-de-lys for the Banks family and a lion for the Cocker family is a thunderbolt. This represents the generation of electricity and the town's famous electric trams.

The crest has tower to suggest grandeur and solidity, above which is a pair of windmill sails, symbol of the Fylde area of Lancashire. The red rose represents Lancashire itself.