From Heraldry of the World
Your site history : Blaenau Gwent
Jump to navigation Jump to search 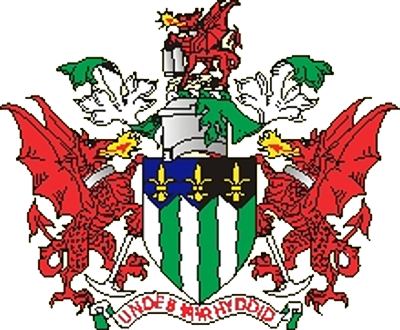 The shield forms a map illustrating the name of the borough which means - where the valleys meet the mountains of Gwent . The base of the shield is paly wavy of six argent and vert, representing the three main river valleys - the Sirhowy, the Ebbw and the Clydach. The chief has the per pale azure and sable field and golden fleur de lys of the ancient Kingdom of Gwent, as seen in the arms of Monmouthshire.

The green and white colours of the mantling and creat wreath are the livery of the Tudor kings and of Wales.

The crest features a red Welsh dragon, based on that used by the old Ebbw Vale and Crickhowell councils. The dragon is placed on a mound of coal for coal mining, and breathes flames and has a steel collar and supports a pair of mill rolls for the steel industry.

The arms are supported by two more dragons similar to the one in the crest, each supporting a coal pick.

The motto is UNDEB A RHYDDID meaning Unity and Freedom.