From Heraldry of the World
Your site history : Cape Town
Jump to navigation Jump to search 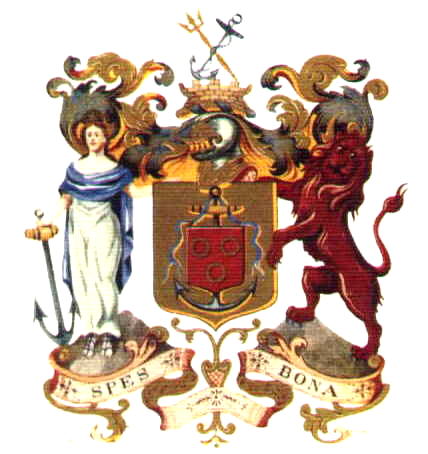 Or, an anchor erect sable, stock proper, from the ring a riband flowing azure and sus­ pended therefrom an escocheon gules charged with three annulets of the field. And for the Crest on a Wreath of the Colours upon the battlements of a tower proper a trident in bend dexter or, surmounted by an anchor and cable, in bend sinister, sable.
Supporters: On the dexter side, standing on a rock a Female Figure proper vested argent, mantle and sandals azure, on her head an estoile radiated or, and supporting with her exterior hand an anchor also proper, and on the sinister side standing •on a like rock a lion rampant guardant gules."

The anchor symbolises the good harbour, the three rings on the smaller shield are taken from the arms of Jan van Riebeeck, the founder of the city. The arms were first granted on June 12, 1804 by Commissioner-General J. de Mist, when the city was still ruled by the Dutch. He granted the city a seal with an anchor, on which was placed a shield with the Van Riebeeck arms. The anchor served as a supporter. In 1804 The Netherlands were a French vassal state, called the Batavian Republic. In the Batavian Republic all used of arms was illegal and no arms could be granted, making the event in Cape Town a unique event. 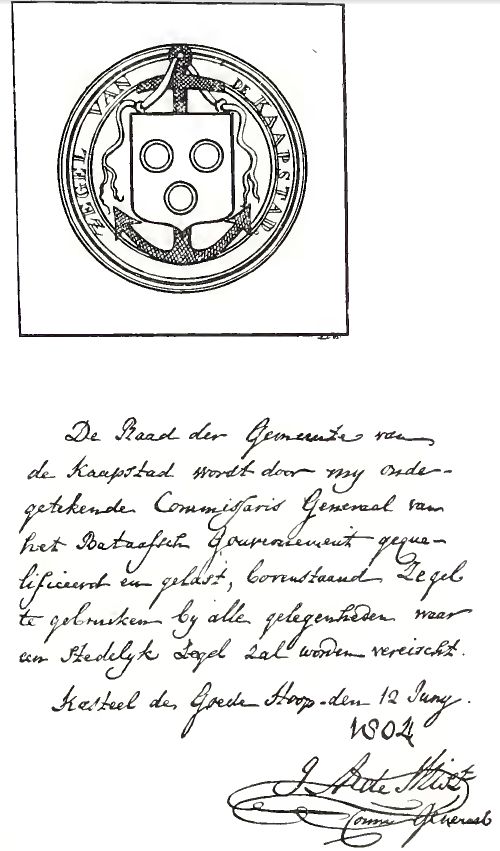 The original seal was still in use in the 1950s and was officially registered in 1956, with an added English legend (the original was Zegel van de Kaapstad, the English addition was The council of the city of Cape Town).

In 1899 the, now British, governor discovered that the arms were never recorded at the College of Arms in London. He thus applied to the College of Arms to approve the arms, as well as augmentation with crest, supporters etc. The College of Arms granted the above arms. Unfortunately the whole old arms were placed in a shield. The female figure represents Good Hope, the lion is the British lion, but could also be the Dutch lion. The crest shows symbols for the harbour, the motto means Good Hope.