From Heraldry of the World
Your site history : Frederiksberg
Jump to navigation Jump to search 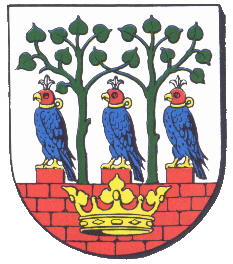 The arms were granted by Royal decree in 1899.

Frederiksberg was founded as a city with many parks, which is symbolised by the wall and the trees. The crown is a symbol for King Frederik. The three falcons are a symbol for the only falcon training centre in Denmark, which was situated in one of the parks in the city.