From Heraldry of the World
Your site history : Great Grimsby
Jump to navigation Jump to search 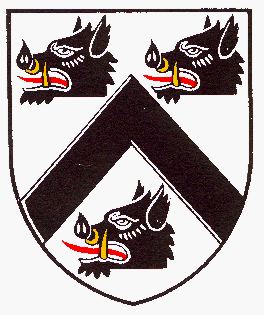 The arms were officially recorded at the visitation of 1592.

It is popularly believed that the boars' heads allude to a right of the Mayor and Aldermen to hunt boar in Bradley Woods but the only evidence to support this is the medieval Mayoral Seal, which appears to depict a boar hunt. Several families connected with Grimsby had similar charges on their arms. A family of de Grymesby bore chevrons on their arms, and a Member of Parliament for Grimsby elected in 1762, William Broxholme of Barrow who was later also Mayor and Recorder of the town, bore a chevron between three brocks' (badgers') heads.

The earliest surviving impressions of the Corporation Seal using the arms date from the mid-seventeenth century, and when the largest of the town's three maces was remodeled in 1645 the arms were used to decorate the end of its shaft. Earlier Corporation documents were sealed with the Grim and Havelock Seal and as an impression of it has survived on a final concord dated 1694, both seals seem to have been in use at that time.