From Heraldry of the World
Your site history : Hove (Brighton and Hove)
Jump to navigation Jump to search 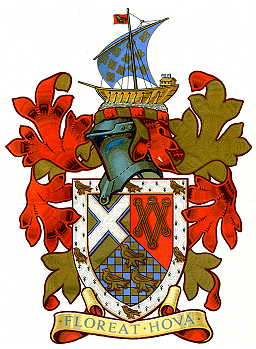 Arms: Per chevron the chief per pale Or and Gules on the dexter a Saltire Azure surmounted by another Argent and on the sinister two Pairs of Leg-Irons one chevronwise the other reversed and interlaced of the first the base chequy Azure and Or three Martlets one and two of the last all within a Bordure Ermine charged with six Martlets also Or.
Crest: On a Wreath of the Colours upon a Mount of Shingle an Ancient Ship proper with the sail displayed Azure semee of Cross Crosslets Or and on a Banner Gules flying from the masthead to the dexter a Martlet as in the Arms.
Motto: 'FLOREAT HOVA' - May Hove flourish.

The emblems denote that Hove, when it received its Boyal Charter, was composed of the parishes of Hove and Aldrington and is situated in the Rape of Lewes in the County of Sussex.
The original Parish Church of Hove was dedicated to St. Andrew and the first quarter of the shield shows St. Andrew's cross on a field of gold.
The second shows prisoners' shackles on a red field. St. Leonard is the Patron Saint of all prisoners, captives and slaves and also of the Parish Church of Aldrington.
The gold and blue checkered base of the shield is taken from the arms of the de Warrene family and here represents the Rape of Lewes.
The three martlets thereon are from the device used by the town before it obtained arms. The six martlets are charged on the ermine bordure, being emblems of Sussex.

The ship, which is ashore on a shingle beach, represents a 16th century French galley and commemorates French attacks on the coast of Hove.

The motto was already used by the Hove Commissioners when they commenced their duties in 1873.

Literature : Information leaflet issued by the Borough of Brighton and Hove.