From Heraldry of the World
Your site history : Kärnten
Jump to navigation Jump to search 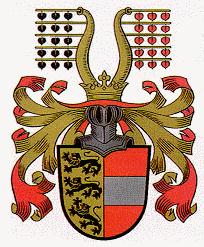 The arms were officially granted in 1930.

The oldest known arms for Kärnten showed a black panther, derived from the arms of the Sponheim family, the first Dukes of Kärnten. The present arms appear in 1237 in a seal of Ulrich III. The arms have not changed ever since. The helmet, crest and mantling were also derived from the ducal arms.

The meaning of the arms, however, is not known.

The arms were used in 2013 by the anti-EU BZÖ party in a cartoon, where the lions of Carinthia sniff and eat the EU stars: