From Heraldry of the World
Your site history : Macedonian Orthodox church
Jump to navigation Jump to search 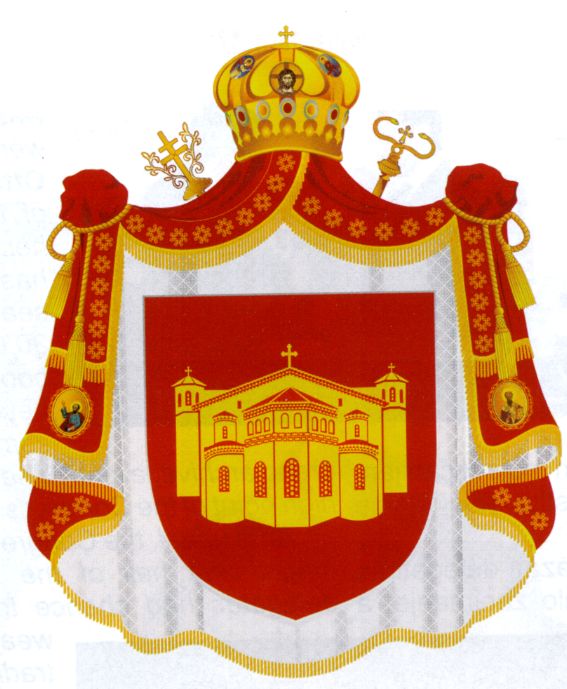 The arms were officially adopted on November 12, 2009.

The arms show the St. Sophia Cathedral in Ohrid, the main church within the Macedonian Orthodox Church. The shield is surrounded by the mantle of the Archbishop, which is braided with 33 crosses. These crosses are taken from the Most Holy Thetokos monastery in Veljusa. The two small images on the mantle are those of St. Paul on the right and St. Clement of Ohrid on the left.

The crown on the mantle also has three small icons, the one in the centre displaying Jesus Christ, the two on the sides the Most Holy theotokos and the Archangel Gabriel. Both are based on icons in the cathedral church in Ohrid.

The cross behind the mantle is based ona cross from the St. Panteleimon Monastery in Gorno Nezeri and the sceptre is the symbol of the Archbishop of Ohrid being the Head of the Macedonian Orthodox Church.

These arms showed the facade of the church of St. Clement in Ohrid, but were poorly designed and described. I have no image of these arms.