From Heraldry of the World
Your site history : Neu-Isenburg
Jump to navigation Jump to search 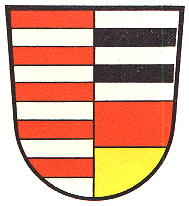 Neu-Isendorf was founded in 1699 by Count Johann Philipp of Isenburg as a refuge for Huguenot refugees from France. It was named Philippsburg, but the name lasted only about 75 years. In 1816 the village became part of Hessen and in 1894 it received city rights.