From Heraldry of the World
Your site history : Obergrombach
Jump to navigation Jump to search 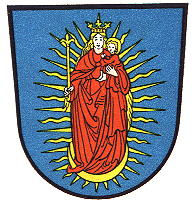 Obergrombach was mentioned as a city in 1337 and belonged to the State of Speyer. The oldest known seal, however, dates only from 1746. It showed the madonna with child, the patron saint of Speyer. All later seal showed the same composition. The arms were officially granted in 1899 in the colours of Speyer.