From Heraldry of the World
Your site history : Powys
Jump to navigation Jump to search 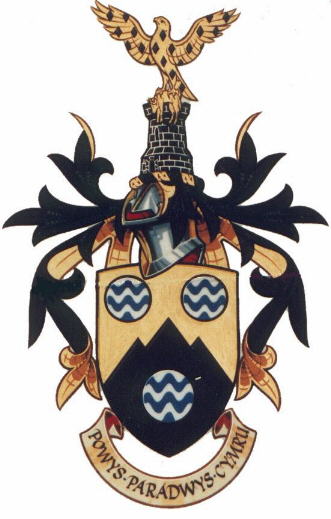 Arms: Per chevron bevilled Or and Sable three Fountains proper.
Crest: On a Wreath Or and Sable rising from a Tower Sable masoned Argent a Red Kite Or semy of Lozenges Sable grasping between its talons a Golden Fleece; Mantled Sable doubled Or.
Motto: 'POWYS PARADWYS CYMRU' - Powys, the paradise of Wales.

The arms were officially granted on March 2, 1984.

The gold symbolises the wealth of the area and black both mining and the Black Mountains. The fountain is a medieval heraldic charge, always shown as a roundel barry wavy Argent and Azure. It represents water and, therefore, both refers to the water catchment area and the rivers and lakes. The arms, therefore, contain references to the hills and mountains, rivers and lakes, water supply and industry.

The crest continues the colouring of the arms. A tower has been used in preference to a mural crown, which alludes to the county's military history and remains. From the tower rises a red kite, a bird almost extinct in Britain, but surviving here. The bird is semy of black lozenges for the former coal mining industry, while the golden fleece it carries is a reference to the importance of sheep rearing in Powys.

The motto is Welsh for Powys - the paradise of Wales.