From Heraldry of the World
Your site history : Rammersweier
Jump to navigation Jump to search 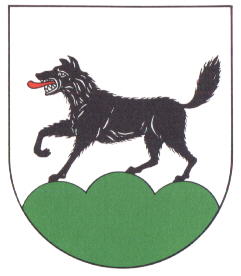 The local council chose a wolf based on an old local legend, in which in the Reformation a priest preached the new Lutheran faith. The people of Rammersweier attacked the church and nearly killed the priest. Afterwards the priest described the villagers as a pack of wolves attacking a lamb. Ever since the villagers were known as wolves, hence the choice of the symbol.

The village used in the 19th century a seal with the letter B (from Baden ?), later the seal showed a wolf under a crown, which was placed in a shield in 1899.