From Heraldry of the World
Your site history : Schmieheim
Jump to navigation Jump to search 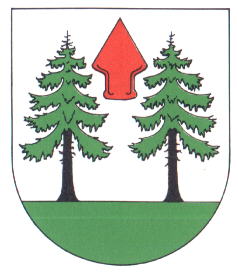 The arms were designed and adopted in 1899.

The arms symbolise agriculture and forestry, the two main activities in the municipality. The oldest known seal of the village dates from November 21, 1610. It shows a goat buck. This animal was taken from the canting arms of the Böcklin von Böcklinsau family, who used a silver buck in red. They owned the village from 1513 until the middle of the 18th century.
In the 19th century the village used a seal with two pine trees, a plough iron and a crown. In 1898 the State Archives proposed as arms the buck based on the old seal. However, the council wanted to use the image of the seal and thus the above arms were designed. As a small village, the crown was omitted.