From Heraldry of the World
Your site history : Schwaz
Jump to navigation Jump to search 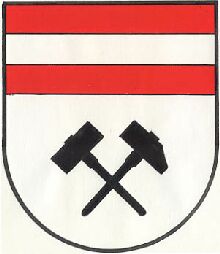 Schwaz received town rights already in 1326, but it never had its own arms until the 17th century. In the 16th and 17th century in different sources and in the seals of the miner's guild, two crossed miner's tools were used. The type of tools differed between different sources however. They were not used in official town documents. The tools clearly symbolised the importance of mining in the area. Only in 1899, when Schwaz received city rights, the tools became the official symbol of the city, with as a chief the arms of Austria.