From Heraldry of the World
Your site history : Singen
Jump to navigation Jump to search 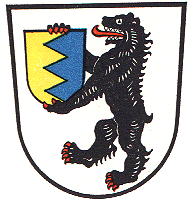 Singen was a small village until the end of the 19th century, when it started to grow rapidly. In 1899 Singen received city rights. The city did not use any arms on its seal in the middle of the 19th century. The present arms were designed and granted in 1899.

The bear is derived from the arms of the Abbey of Sankt Gallen, which had many possessions in the area in the Middle Ages. The bear holds a shield with the arms of the Lords of Singen, mentioned since 1087. Their arms are first known from the 14th century.