From Heraldry of the World
Your site history : Skopje
Jump to navigation Jump to search 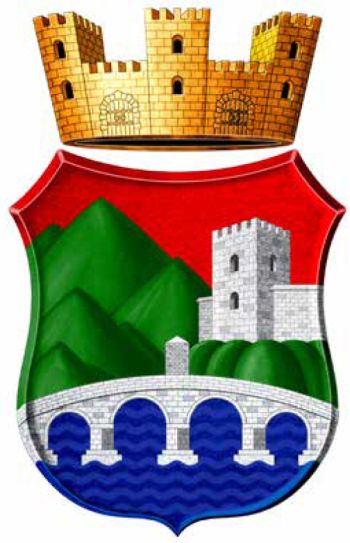 The arms represent the stone bridge over Vardar river, the Kale fortress and the mountain Skopska Crna Gora.

The arms are in use since the 1950's and have been changed in design a lot during the years:

The oldest heraldic representation of a symbol of the City of Skopje is found on a naval map, dated 1339, by Italian cartographer Angelino de Dulcherto.3 On this map showing main ports, Skopje is depicted with a banner over a fort and the inscription “Scopi” next to it. On the banner is a red double-headed eagle on a yellow background.

Just half a century later, Skopje came under the influence of the Ottoman Empire and remained under its control until a period in which there was no real possibility for the city to have arms.

After the First World War, Skopje became part of the Kingdom of Yugoslavia. Only in 2007 a design for arms for Skopje was discovered on the book covers of volumes in the private collection of King Alexander Karadjordjevic (died 1934). The appearance of the arms is similar to the current design, with the bridge on the arms having 4 arches. The shield is in the Spanish style and it is crowned with “the crown of Tsar Dushan”.

During the Bulgarian administration in the Second World War, the issue of formally establishing the arms of Skopje emerged. The Mayor Janko Mustafov commissioned the municipal artist to provide visual depictions of arms of Skopje. At the meeting of 12th July 1941, a decision was made to adopt the following proposal for the Arms of Skopje: “Kale Fortress, lion flying a red flag, with wheat class, and the Sharr Mountains, Bridge over the river Vardar; for a motto, ‘Blesti and Blagodenstvuva’ (Shines and Lives Well)”. This decision was forwarded to the Ministry of the Interior and National Health in Sofia. On 6th October 1941 permission was granted for the use of the Arms, with a small modification, the flag which the lion was flying had to be the Bulgarian tricolor and not red as originally proposed. An coloured image was attached, but this image is lost in the Skopje Archives. It is not known if the arms were ever used.

Use of the arms in the city: