From Heraldry of the World
Your site history : Southborough
Jump to navigation Jump to search 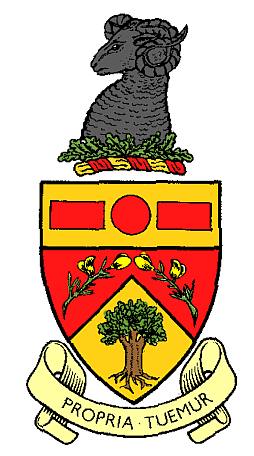 Arms : Per chevron Gules and Or in chief two Sprigs of Broom stalked leaved and flowered of the last and in base an Oak tree fructed and eradicated proper on a Chief Gold a Torteau between two Billets fessewise of the first.
Crest : On a Wreath of the Colours issuant from a Chaplet of Oak Leaves Or a Ram's Head Sable.
Motto: 'PROPRIA TUEMUR' - We look after what is ours

The arms were officially granted on December 14, 1953.

The tree recalls the former 'Bounds Oak' on the Great Bounds Estate, the site of a former historical mansion and the broom refers to the derivation of the place name High Brooms. The red roundel and billets refer to the cricket ball industry, long associated with Southborough, and the brick making industry which led to the growth of High Brooms.