From Heraldry of the World
Your site history : Steiermark
Jump to navigation Jump to search 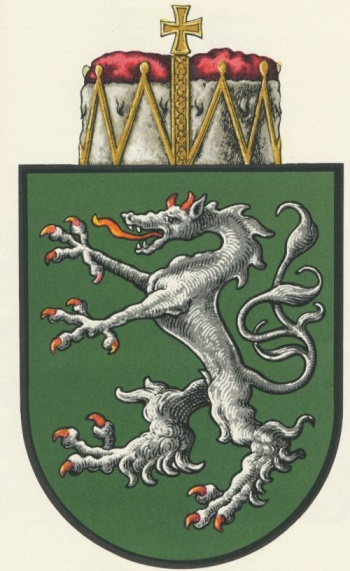 The arms were officially granted in 1926 and show the historical silver panther on a green field. The hat is the Ducal hat.

Steiermark (Styria) was created in the 11 and 12th centuries and in 1180 it became a Duchy. It was named after its capital, Steyr, now in Oberösterreich. After a short rule by the Bohemian Kings, Steiermark became part of Austria in 1282.
Ever since the area of Steiermark has decreased. Parts now belong to other Austrian states, and in 1919 a large area became part of Yugoslavia (now Slovenia).

The panther first appears as a symbol for Steiermark on a seal from Duke Ottokar III from around 1260. The colours are known from the same time and have not changed since.

The panther is also used by the capital, Graz.