From Heraldry of the World
Your site history : Verein für das Deutschtum im Ausland
Jump to navigation Jump to search 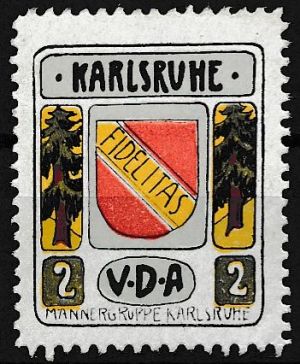 On the 13 May 1880, in Vienna, the Deutscher Schulverein (DSV/German School Association) was formed. In 1881, the Allgemeine Deutsche Schulverein zur Erhaltung des Deutschtums im Auslande (General German School Association for the Conservation of Germanness Abroad), was formed in Berlin by Hamburg lawyer Julius Scharlach. It was modeled on the Viennese DSV. The associations in Vienna and Berlin initially worked closely together. There are donation cards with the imprint of DSV-Berlin and Vienna in existence. In 1908, the Berlin association was renamed Verein für das Deutschtum im Ausland (Association for Germanness Abroad, VDA).
During World War I, the VDA was at work in the service of the fighting soldiers. Its collections (donation cards such as folk song cards, Our Field Gray etc.) were there to benefit the wounded, displaced persons and the next of kin of fallen soldiers.

After 1919, the Association in Austria continued under the name Deutscher Schulverein Südmark (German school association South region). In Germany, the work of VDA was long interrupted after the war. It was not until 1925 that the association could commence its work again in Berlin, later Dresden. It was renamed Volksbund für das Deutschtum im Ausland in 1933. It still exists as Verein für Deutsche Kulturbeziehungen im Ausland.

The association had many local groups and many issued charity stamps, but very few with an heraldic theme.

Thes was a local association in Karlrsuhe and issued charity stamps with arms of towns in Baden. Probably either during WWI or in the 1930s. The stamps are not dated.