From Heraldry of the World
Your site history : Weinheim
Jump to navigation Jump to search 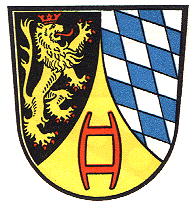 The city of Weinheim was founded in 1250 near the village with the same name by the Counts of the Pfalz. In the early 14th century the whole are became part of the Pfalz. In 1803 the city became part of Baden.The old arms of the city only show the lower figure, a Weinleiter, or wine carrier, a device to carry casks of wine. The carrier first appears on the oldest seal of the city, known since 1337. It is obviously a canting element, but it was also used by the most important noble family in the city, the Schwende family. Later the carrier was combined, in many different ways, with the lion of the Pfalz and/or the diamonds of the Wittelsbach family, Counts of the Pfalz.

In the 19th century, when the city belonged to Baden, only the carrier was used in the arms. In 1899 the present arms were granted.