From Heraldry of the World
(Redirected from Znaky Republiky Ceskoslovenské) 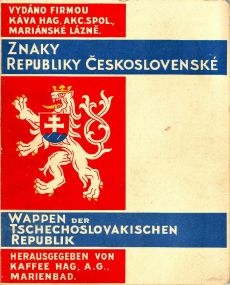 The album ‘Znaky Republiky Československé – Wappen der Tschechoslowakischen Republik' was issued around 1932-1933. The exact date is not mentioned, but in a book from 1933 issued by the dutch Koffie Hag it is stated that the Czechoslovak album was already issued.

The Czechoslovak album was published by Grafických Umĕlechkých Závodů v. Neubert a synové, Praha-Smíchov (Graphischen Kunstanstalten v. Neubert und Söhne, Prag-Smíchov). The authors were Vilém Klein (Wilhelm Klein) and Anton Morávek.
The whole album is written in both Czech and German. The album has been published in two versions : a simple and a luxury edition. The luxury edition has a hard-cover in colour and a cardboard case. The luxury edition also has 6 more pages with the regional arms. I only know of a title page in German of the simple version, there may also be a Czech verion of this.

The album is published as Part 1, but a second part was never published.

The album contains 180 stamps with images, which are numbered separately in each section. The album is divided in chapters per Region, with the Regional arms on a separate pag (in the luxury edition only), followed by again the Regional arms, the regional capital and, alphabetically, the other towns and cities in the Region. The Regions are: Bohemia, Moravia, Silezia, Slovakia and Carpathorussia.

The information given for each town generally does not explain the arms, but gives some historical notes and the blazon or description of the arms. Only in a few cases an explanation of the arms is given. Also, the number of inhabitants of the town is given.

The album is introduced with an elaborate text on heraldry, and, like most other albums, has a chapter on coffee and caffein.

The back of the images shows the blazon in both German and Czech, see the examples below..

The images were printed in one single sheet: 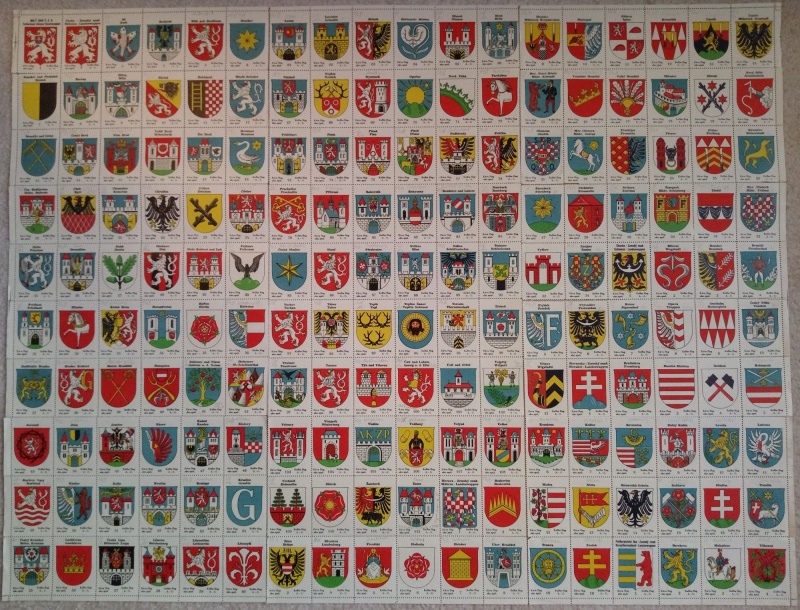 A version of the File:Cs-hag.pdf.

The album has been published twice, which has resulted in some changes in the stamps, but not in the album itself.

There is only one true variation, which is the arms of Unčov, which is published with and without a red tongue.

In addition to these, all the arms of the Provinces are shown in two different shapes of the shield. The arms itself have not changed, see below for an example.

Finally, many arms were published initially with the Czech text only, but in the second edition most were printed bilingual, see below.

For all images (including texts on the reverse) : see here