As far as I know none of the subdivisions or cities use arms, but some do use a logo. 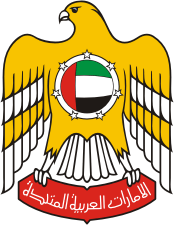 The emblem of the United Arab Emirates was officially adopted in 1973. It is similar to the coats of arms and emblems of other Arab states. It consists of a golden falcon of Saladin. The falcon had a red disk which shows an Arab sailboat in its interior. The disk is surrounded by a chain. The falcon holds with its talons a red parchment bearing the name of the federation in Kufic script.

On March 22, 2008, the emblem was modified. The main change was that the Arab sailboat was replaced by the UAE flag and seven stars representing the seven Emirates of the federation. 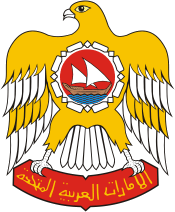