From Heraldry of the World
Your site history : Cambridgeshire
Jump to navigation Jump to search 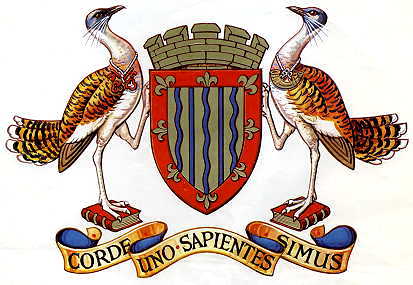 Arms : Or three Palets wavy alternating with two Palets Azure a Bordure Gules flory on the inner edge Or; the Shield ensigned by a Mural Crown Or.
Supporters : On either side a Great Bustard proper the exterior leg resting on a closed Book Gules garnished Or pendent from the neck of the dexter by a Cord Argent two Keys in saltire wards uppermost and outwards Gules and from the neck of the sinister by a like Cord a Hunting Horn mouth to the dexter Or.
Motto: 'CORDE UNO SAPIENTES SIMUS' - With one heart let us be men of understanding.

The arms were officially granted on November 1, 1976.

The blue wavy pallets represent the many rivers of the County, while the straight pallets are for the drains and dykes that run through the Fenlands.

The bustard supporters are continued from the 1914 arms and the 1965 arms of Cambridgeshire and Ely, but with neck badges for the added areas of Peterborough (crossed keys) and Huntingdon (hunting horn). The motto combines that of the two old counties and translates as "Let us be wise with one heart".

The motto is "Per Undas Per Agros" or "Through the waves, through the fields".

Arms : Azure, a bend wavy and a double-tressure set with fleurs-de-lis, their heads pointing alternatively inwards and outwards, all gold.
Crest : On a wreath gold and azure, a castle with an open helmet above the port, proper.
Supporters: On either side a Great Bustard proper.
Motto: 'PER UNDAS, PER AGROS' - Through the waves, through the fields

The arms were officially granted in 1914.

The gold wave on a blue shield represents the river Cam, and the trade brought to the county by it. The many waterways of the Fenlands are also suggested. The distinctive double-tressure is taken from the Royal arms of Scotland, as the Earldom of Cambridge was held by the Scottish crown. The castle in the crest is Cambridge Castle as found in the Cambridge city arms.

Above the door of the castle is a helm from the arms of Sir H G Fordham, chairman of the County Council at the time of the grant. The supporters are Great Bustards, now extinct in England. It is claimed that the last of these were in Cambridgeshire. However Wiltshire County Council make a similar claim and have a Bustard as their crest.