From Heraldry of the World
Your site history : Kreiensen
Jump to navigation Jump to search 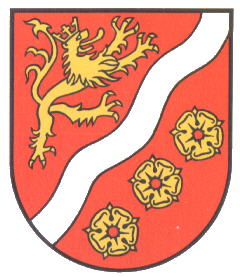 The silver bar represents the Leine river that runs through the municipality. The lion represents two dynasties that played a major role in the local history; the Lords von Homburg, who had many possessions around Greene, and the Dukes of Braunschweig, who ruled most of the area for many centuries. The roses are taken from the arms of the Lords of Oldershausen, a medieval family who were of importance in the 14th century.

Previously the municipality used the (quite non-heraldic) arms below, which were adopted in 1923, but were never officially granted. 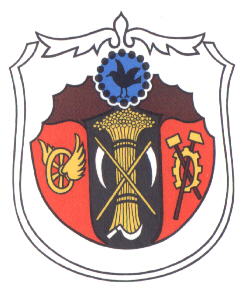 The arms show in the right half a winged wheel, symbol for transport, which symbolises the importance of Kreiensen as a railway junction. The garb, scythes and sickle represent agriculture, the wheel an miner's tools industry and mining in the municipality. The crow above the inner shield is a canting element (Krähe=crow).