From Heraldry of the World
Your site history : North Hertfordshire
Jump to navigation Jump to search 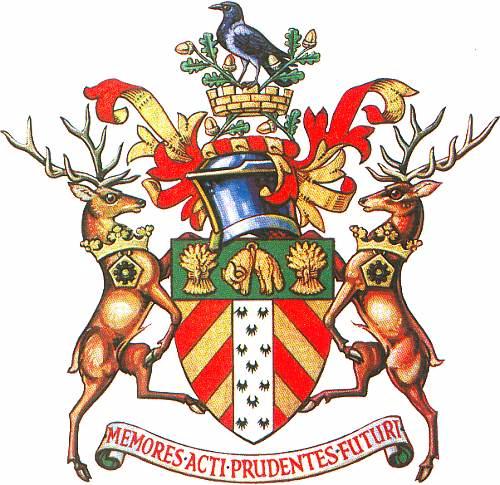 Arms : Chevronny of six Or and Gules a Pale Ermine on a Chief Vert a Fleece between two Garbs of Barley Or.
Crest : On a Wreath of the Colours two sprigs of Oak in saltire fructed proper enfiling a Mural Crown Or perched thereon a hooded Crow (Corvus cornix cornix) close proper.
Supporters : On either side a Hart attired of ten tynes proper gorged with a Coronet pendent therefrom a Pentagon Or charged with a Cogwheel Sable.
Motto: 'MEMORES ACTI PRUDENTES FUTURI'.

The shield of arms indicates the history of the district. The red chevrons on gold recall the arms of the de clares - a red chevron on gold - and the Barringtons - three red chevronells on white. These two families held the manors of Baldock and Letchworth. The ermine is taken from the arms of Lytton of Knebworth, a stately home in the former Hitchin rural district.
Ermine also suggests royalty and thus the royal manor of Hitchin. Arranged as a pale or vertical stripe it also depicts the roman Ermine Street, which runs north through the district to meet the ancient Ickneild way trackway at Royston, represented by the green chief. The chief is charged with a fleece form Hitchin's arms between two sheaves of barley. The latter were found in the arms of both Hitchin and Baldock. These symbolise the traditional industries of the area - agriculture, malting and wool and straw-plaiting.

The crest shows the special features unique to North Hertfordshire. The Royston or hooded crow is a local variety. He stands on a gold mural crown, like that above the shield of Hertfordshire County Council]], through which are crossed oak branches from the crest of Letchworth, indicating the growth of the garden city there. The crown shows five merlons or battlements for the five merged councils in the new district.

The crest wreath and mantling are in the gold and red livery of the de Clares and the Montfitchets.

The supporters are two harts adapted from those of Hertfordshire County Council, and found somewhere in the arms of most towns and districts of the county. Each of the harts' antlers has five tynes or branches, another reference to five Hertfordshire councils combined. The stags are differenced by the crowns around their necks, taken from the Lytton arms. From each crown hangs a pentagon - yet another reminder of the five constituent authorities - charged with a black cogwheel symbolising the modern industries of the area.

The motto means We are mindful of the past and careful for the future. It combines parts of the mottoes of Hitchin and Letchworth. The motto is in Latin to recall the many roman remains of the district.