From Heraldry of the World
Your site history : Sittingbourne and Milton
Jump to navigation Jump to search 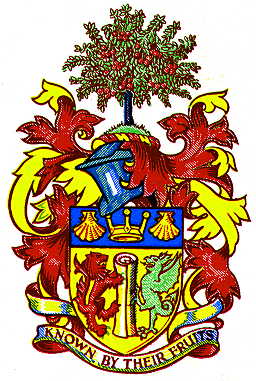 Arms : Or a Lion rampant Gules and a Wyvern rampant combatant Vert supporting a Scroll of Parchment erect proper on a Chief Azure a Saxon Crown between two Escallops of the field.
Crest : On a Wreath of the Colours on a Mound a Cherry Tree fructed proper.
Motto: 'KNOWN BY THEIR FRUITS'

The gold background, the colour of royalty, refers to the area's royal connections, through the Royal Manor of Milton and the Elizabethan charters granted to Sittingbourne. The lion recalls the ancient Red Lion Inn, an important place on the Dover Road, especially in coaching days. Here Henry V is reputed to have been entertained on his triumphant return from Agincourt. The wyvern was used as a device by the Milton Regis UDC and the later Council before arms were granted. It indicated the defences made by the area's ancient inhabitants against Danish and later invaders. The scroll of parchment refers to industry, and the town's paper making industry in particular. The blue chief refers to water, which has played an important role in the life of the area, whether for ancient fisheries, navigation or modern industry. The Saxon crown indicates that Milton was was a royal manor as far back as the day's of King Alfred. The shells recall the the valuable fisheries of Milton, dating from the oyster fisheries in Roman days. Also as the emblem of a pilgrim, they refer to the fact that Sittingbourne was a stopping place on the road to St. Thomas à Becket's shrine at Canterbury.

The mound is a reminder of the value of the land, not only for agriculture but also for minerals. The tree points to the fact that Sittingbourne is the centre of cherry growing, it is said that the first cherries were planted in England at Teynham, near Sittingbourne, by Henry VIII.