From Heraldry of the World
Your site history : Tameside
Jump to navigation Jump to search 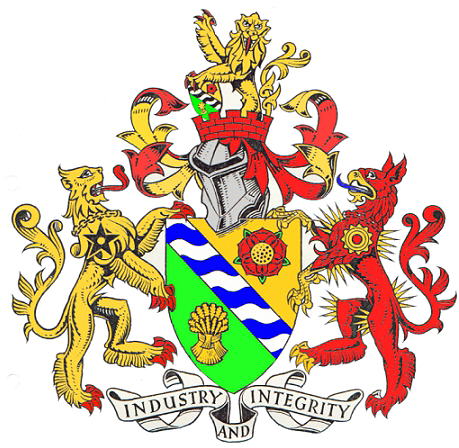 Arms : Per bend Or and Vert a Bend barry wavy Argent and Azure between in chief a Rose Gules barbed and seeded proper and in base a Garb Or.
Crest : Out of a Mural Crown Gules a demi-lion guardant Or resting the sinister forapaw on an Escutcheon of the Arms, Mantled Gules doubled Or.
Supporters : On the dexter a Lion Or gorged with a Chain pendent therefrom a Mullet pierced Sable and on the sinister a male Griffln Gules armed beaked irradiated and gorged with a Chain pendent therefrom a Cogwheel Or.
Motto: 'INDUSTRY AND INTEGRITY'