From Heraldry of the World
Your site history : Öhringen (kreis)
Jump to navigation Jump to search 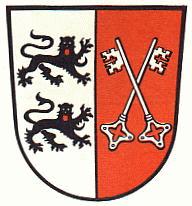 The largest part of the district belonged in the 12th and 13th centuries to the County of Hohenlohe, which is symbolised by the two lions of Hohenlohe in the right half of the arms. The keys symbolise the powerful Abbey of Öhringen, that held many goods in the district.