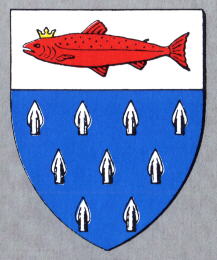 The salmon in the chief refers to the Værebro Å river, which forms the Southern border of the municipality. The salmon was also part of the seal of the former Ølstykke hundred.

The arrow points refer to the Battle of Værebro between King Niels and Erik Emune in 1133, where Niels got killed and Erik became as Erik II King of Denmark.