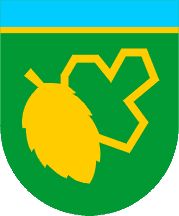 The arms show the fruit and a leaf of hops, as a symbol for the local agriculture, under a chief of blue.

The historical arms of Žalec, which are known from the oldest seal of the town from 1346 and used until 1999 show two black eagle wings, a rose and the upper part of a fleur-de-lis. The eagle wings were a canting symbol for the German name of the town, Sachsenfeld; Sachsen meaning wing-bones. The meaning of the rose and the fleur-de-lis are not known.