From Heraldry of the World
Your site history : 126th Finance Battalion, US Army
Jump to navigation Jump to search 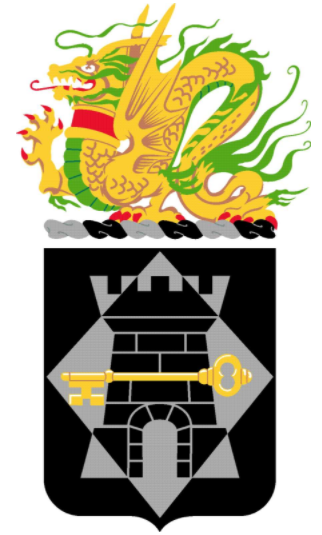 Shield: Sable a lozenge throughout Argent (Silver Gray) surmounted by a tower counterchanged over all a key fesswise wards to base bow to sinister Or.
Crest: On a wreath of the colours Argent (silver Gray) and Sable a winged Oriental dragon issuant Or armed and langued Gules garnished Vert, gorged with a collar Gules fimbriated Or.
Motto: Dragon purser pay ready.

Silver Gray and golden yellow are the colours traditionally associated with the Finance Corps. Black denotes solvency and solicity. The Tower represents defense, stability and Central Europe, commemorating the unit's baptism of fire in World War II. The counterchanged colours underscore unity and cooperation. The Key is symbolic of security and alludes to logistics. The lozenges is adapted from the Finance Corps insignia of branch. The stylized winged Oriental dragon commemonrates the organization's service in Vietnam. Dragons are strong and vigilant and are renowned as "guardians of treasure". The red collar honours the unit's Meritorious Unit Commendation earned in Vietnam. The Coat fo Arms was approved on 1 February 1993.

Literature: The Institute of Heraldry, US Army