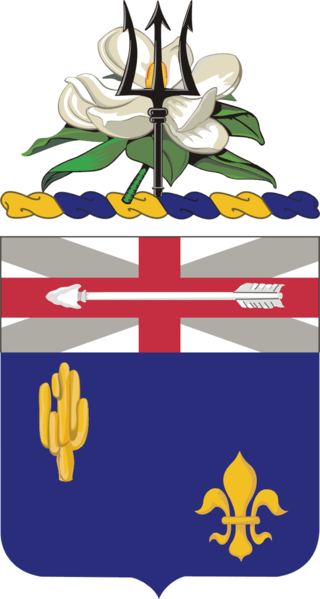 Shield: Azure, in bend a giant cactus and a fleur-de-lis paleways Or; on a chief Argent a saltire Gray surmounted by a cross Gules charged with an arrow fessways of the third.
Crest: That for the regiments and separate battalions of the Mississippi National Guard: On a wreath of the colors (Or and Azure) a slip of magnolia full flower with leaves Proper behind a trident Sable.
Motto: STAND FAST.

The shield is blue, the present Infantry color, and the chief is white, the old Infantry color. The arrow and cross represent Indian War and War of 1812 service. The cactus indicated the organization's service during the Mexican War. The gray saltire is for the organization's service as Confederate troops during the Civil War. World War I service is denoted by the fleur-de-lis. It is understood that Colonel Jefferson Davis, when commanding the troops at the Battle of Buena Vista, commanded, "Stand Fast, Mississippians," when other troops were beginning to fall back. The motto selected is taken from this command.

The Crest is that for Regiments and Separate Battalions of the Mississippi Army National Guard. The Coat of Arms was approved 4 June 1931.