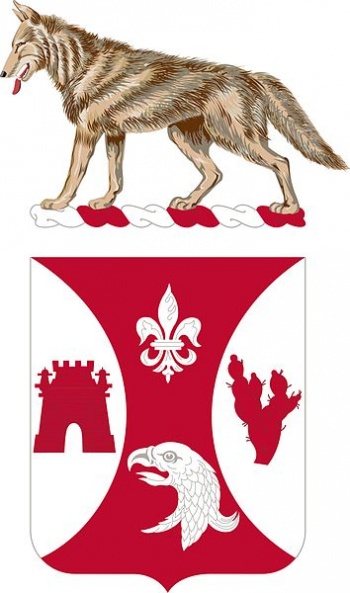 Shield: Gules, in chief a fleur-de-lis, in base an eagle’s head erased Argent, two flaunches of the last, the dexter charged with a castle, the sinister with a prickly pear cactus of the first. Crest:That for the regiments and separate battalions of the South Dakota Army National Guard: From a wreath Argent and Gules, a coyote statant, Proper. Motto: NUNC ET SEMPER (Now And Always).

The cactus is derived from the coat of arms of the 125th Field Artillery, the 109th and the 110th Engineers; the fleur-de-lis, from that of the same organizations; the eagle’s head, from the 110th Engineers; and the castle, from the 125th Field Artillery. This arrangement indicates descent from all organizations, using the colors of the Engineer Corps representing original approval of the design as an Engineer unit. The Crest is that for Regiments and Separate Battalions of the South Dakota Army National Guard.

Literature: The Institute of Heraldry, US Army