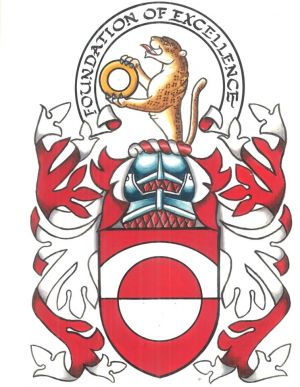 Arms : Per fess Argent and Gules a roundel counterchanged and chief enarched of the second.
Crest :
Motto: Foundation of Excellence

The arms were officially granted in May 2018.

The arms symbolise the illusion of a humped back bridge over a stream in a red setting. However, one can also see a cross section of a pipe half filled with water, the sweep of a bend in a road, a ditch, a mound and so forth, all civil engineering exercises without being specific. The more visionary may also make out the letters A, C, and E. for the A.A.C.E. (Aberdeen Association of Civil Engineers). The arms are in the liveries of the arms of Aberdeen, Gules and Argent thus linking them to the city.

A further link to Aberdeen is by way of the crest which leopard is borrowed from the supporters of the Aberdeen city arms. The demi-leopard is holding in his forepaws an annulet which has been taken from the arms of the mother organisation of the Institution of Civil Engineers as representing the mathematical element of all civil engineering.

© since 1995, Heraldry of the World, Ralf Hartemink Image from The Court of the Lord Lyon Facebook page; background by Anthony Maxwell on said page.