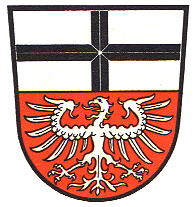 Ahrweiler belonged to the Counts of Are and became a possession of the Archbishops of Köln in 1246 when Konrad of Are-Hochstaden became Archbishop of Köln. He also granted the city rights in 1248. The town belonged to the State of Köln until 1794.

The arms are derived from the second known seal of the town, which dates from 1365. The arms show in the upper part the cross of the State of Köln, and in the lower part the eagle of the Counts of Are.
The oldest seal, known since 1323 shows the same symbols, but in a quartered shield, with the cross in the first and fourth quarter and the eagle in the second and third.