From Heraldry of the World
Your site history : Aich (Steiermark)
Jump to navigation Jump to search 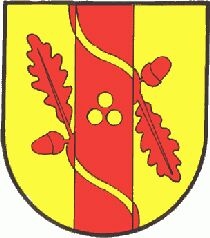 In the Middle Ages, justice was administered at Aich, because a Gerichtsbank (literally: a Bench) was situated here. The pale in the arms is to represent the judge's rod of office. The oak leaves are, of course, a reference to the name of Aich (Eiche, oak). The three balls are the attribute of St Nicholas, the patron saint of the local church.