From Heraldry of the World
Your site history : Airdrie
Jump to navigation Jump to search 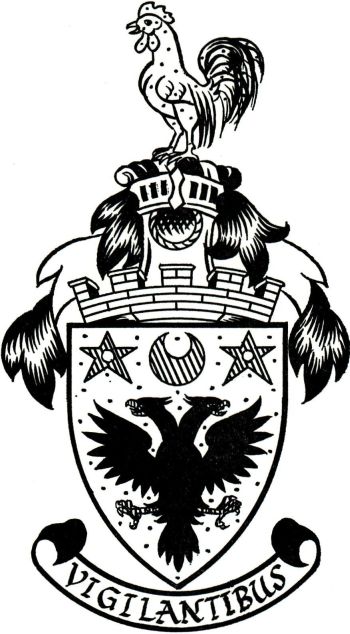 Or, a double-headed eagle displayed Sable, beaked and membered Gules, in chief a crescent between two spur rowels Vert.

Above the Shield is set a Burghal crown and a Helmet befitting their degree with a Mantling Sable doubled Or, and on a Wreath of their Liveries is set for Crest a cock Or, and in an Escrol under the Shield this Motto "Vigilantibus".

The arms follow the device on the Burgh seal, which shows a shield with the, charges, but not the chief, in the arms of Aitcheson of Rochsolloch and Airdrie and with their crest of a cock above. This family were the Superiors of the town from 1769 until 1824.

In granting the arms, Lord Lyon Grant made the field gold instead of silver and made the spur rowels and crescent green; in the arms of the Aitchesons they had been respectively gold and silver on a green chief.

The Latin motto-"Being Watchful"-comes from the seal and is that of Aitcheson of Rochsolloch and Airdrie.