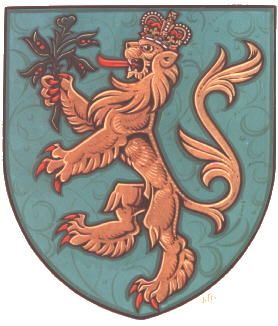 The lion, probably the British lion, was first used on a seal of the Court of Alderney from 1745. The lion holding a sprig of broom, was confirmed as arms of Alderney by King Edward VII. The arms, however, were not officially registered at the College of Arms until 1993.

Literature : Image and information send by The States of Alderney (www.alderney.gov.gg)