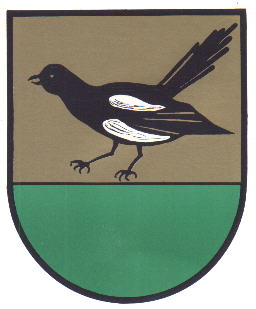 The magpie is derived from the arms of the medieval Lords of Algermissen. Bertold von Algermissen used in 1345 a shield with three arrows (see Bolzum), but already in 1350 used Dietrich von Algermissen a magpie in his seal and arms. The meaning of the bird is not known.

The green and golden colours symbolise the green fields and the rich crops, and thus the agricultural character of the village at the time (the arms were granted in the 1960s).