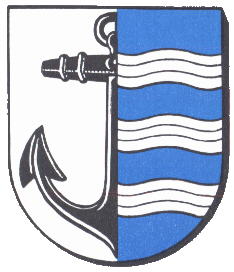 The arms were granted by Royal decree in 1897, and symbolise the sailing and fisheries, which are of great importance to the town. The anchor is also derived from the old seal of the district, known from 1584. It shows St. Clement, patron saint of sailors, with his symbol, the anchor.