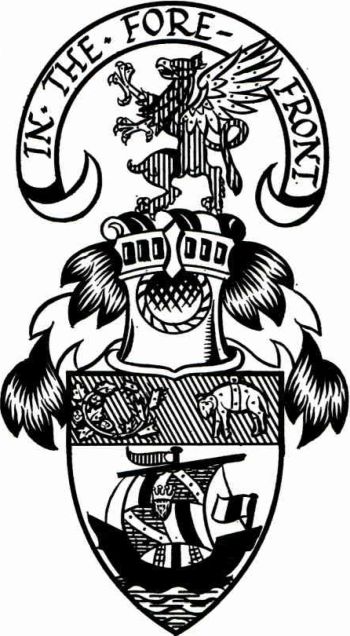 Argent, on the waves of the sea Proper, an ancient galley Sable in full sail, the sail charged with the arms of the Earls of Mar & Kellie, pennon Gules, flag of the field charged with a pale of the Second; on a chief Vert, in the dexter a garland, the dexter half hops and the sinister barley, all Or, and in the sinister a golden fleece.

Above the Shield is placed a Helmet befitting their degree with a Mantling Sable doubled Argent, and on a Wreath of their Liveries is set for Crest a griffin Gules winged, armed and beaked Or, langued Azure, and on an Escrol over the same this Motto "In the Forefront".

The arms show a ship which bears on its sail the arms of the Earls of Mar & Kellie and the Erskine banner at its stern. These allude to the long-standing shipping and shipbuilding interests of the town and the close connections with the Erskine family, of which the Earl of Mar & Kellie is the Head.

The green chief represents agriculture and on it are two symbols of other local industries; the golden garland of barley and hops is for whisky distilling and brewing and the golden fleece for woollen manufacturing.

The griffin crest is taken from the supporters of the Earls of Mar & Kellie and the same colours are used; a griffin had been used on the Burgh seal and was carved on the seventeenth-century Town Cross.