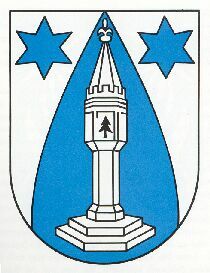 The arms were officially granted on April 9, 1930.

The meaning of the stars is not known.