Incorporated into : 1975 Annandale and Ecksdale (1996 Dumfries and Galloway) 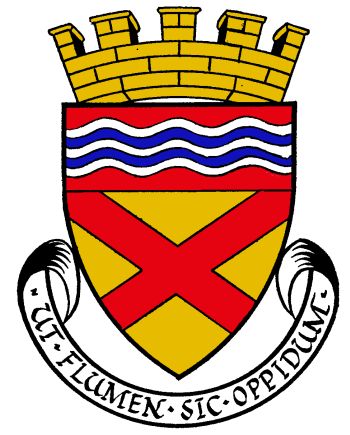 Or, a saltire and chief Gules, the latter charged with five barrulets wavy conjoined Argent and Azure.

Above the Shield is placed a mural crown and in an Escrol below the Shield this Motto "Ut Flumen Sic Oppidum".

Annan seems to have been a Burgh of the Bruce Lords of Annandale in the twelfth century.

The arms are those of Bruce, Lord of Annandale, differenced by five wavy barrulets in the chief to denote the river Annan.

The arms are now used by the Royal Burgh of Annan Community Council.