Incorporated into : 2015 Antrim and Newtownabbey 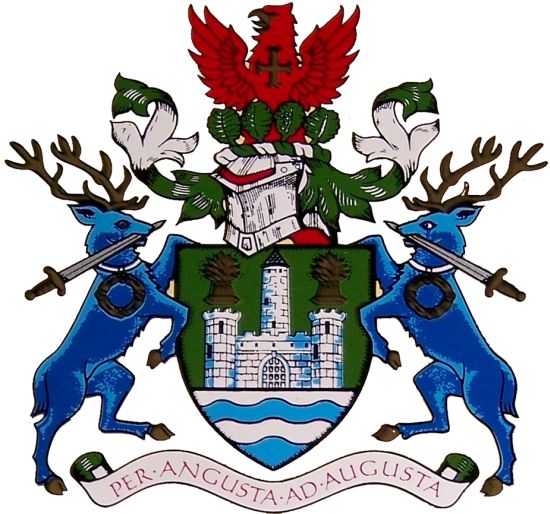 The division of the shield into green and alternate waves of white and blue, symbolises the rural areas and Lough Neagh and Six-Mile-Water. On the base stands a castle gateway like that leading to the Castle at Antrim, and behind it rises the Round Tower. Two gold sheaves of barley, each behind a gold shuttle, flank each side of the castle referencing the ancient linen-making and more modern textile industries.

The red eagle with gold beak is from the arms of the Pakenham family, the Norman family of de Courcy and is connected with the priory at Muckamore's history. The gold cross moline is that of the Viscount Templetown of Templepatrick.

The supporters represent the two great families of the area, the Massereenes and the O'Neills. The black stags, with gold hooves and antlers, have a ribbon of nylon about their necks alluding to the local importance of British Enkalon and from each hangs a chaplet of gold roses. The stags are a variation of the supporters of the Viscounts Massereene and Ferrard, and are derived from the crest of their ancestors and Clotworthys, so important in the early days of Antrim. Each stag holds in the mouth the sword from the O'Neills of Shane's Castle's crest.

The motto is that of the Massereene family and was also used by the Antrim County Council.